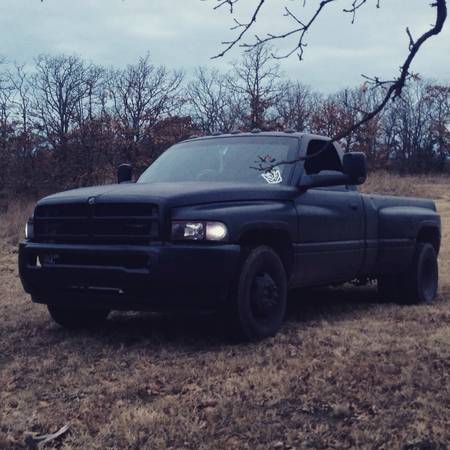 thinking about selling my old red truck. My pride and joy. Lol it’s a 1999 Dodge Ram 3500 2wd dually. 280 thousand miles. It’s plasti diped because the paint is messed up bad. I have the new paint for it. It’s single stage the clean coat is make in it so you spray it and buff it’s and it’s shiny. And I have the primer. It has 5 inch from turbo back. With 80hp injectors. No tuner. The hole front end was rebuilt in dec less than 5.000 miles on it. New gear box new power steering. Nothing wrong with front end it is all new. New rear main seal . New southbend street disc single disc clutch kit. New fly wheel and throw out bearing and all new clutch hydraulics system was replaced with the clutch. New u joints and new carrier bearing. All replaces at 270 thousand miles. Nothing wrong with it. Awesome clutch. And fuel system was put on the same day with clutch airdog 2. And it’s in the shop now for a new rear end, the truck been built right. The in side is nice besides dash cracked but it’s has a cover on it. Nothing else to really add but I know I’m forgetting something else. And the best part is. “”I CAN PROVE EVERYTHING WITH PAPER WORK!”