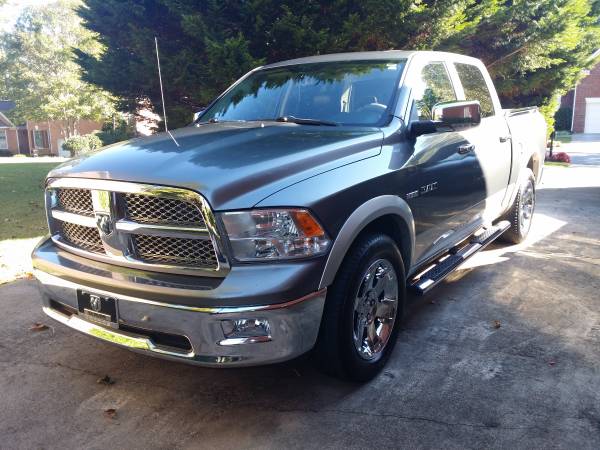 2010 Dodge Ram Laramie 1500 Crew Cab Custom Truck. Fully loaded with nearly everything and I get comments on it all the time. Runs great with only 64,750 miles and has been very well taken care of. I hate to part with it. It is the best truck I have ever owned. It just had a complete tune-up at Palmer Dodge. Only asking $24k, which is much less than a dealer would charge for this year, model, options, and low mileage. Customizations including a moon roof, chrome bed rails, and locking tonneau cover are included. Two tone steel/military grey with chrome all over it. Black leather stitched interior (even the dashboard) with heated and cooled seats/steering wheel. Entertainment system with premium sound and satellite radio. Can play DVD’s on the large screen and has a hard drive to download to. Bed liner with nice thick locking tonneau cover over it. Lots of plugs and a standard outlet. Dimming rearview mirror with tons of storage space. Tow package and rear power window. Many cup holders. Rearview camera with collision detection and avoidance. Heated and lighted power side mirrors. The HEMI V8 engine has been performance tuned to over 400 horsepower. All you have to do is hear the engine and you will want to buy it on the spot. Just had it checked out at Dodge dealer and it is golden. Just look at the pictures and you can see how nice this custom truck is.